Raja Ampat Islands have been widely known around the world for its underwater beauty, not to mention its small islands and its richest marine biodiversity on earth in Coral Triangle due to its advantageous position between the Indian and Pacific Oceans. Located at the Bird’s Head Peninsula of New Guinea Island, Raja Ampat is located in the West Papua province of Indonesia, which can be reached by flying from Jakarta or Bali to Sorong.

The origin of its name, Raja Ampat meaning Four Kings, comes from local mythology about a woman who finds seven eggs. Four of them hatched and became kings of the four biggest islands (Misool, Salawati, Batanta, and Waigeo), while the other three become a ghost, a woman, and a stone.

Raja Ampat archipelago consists of over 1,500 small islands, cays and shoals surrounding the four main islands, with 1,508 fish species and 537 coral species, 699 mollusk species. Some data shows the marine life biodiversity in Raja Ampat is the highest recorded on earth, with massive coral colonies under its high sea surface temperatures. Besides, the remote location of the archipelago is relatively undisturbed by humans, although recently the tourism activities in Raja Ampat is starting to increase despite limited infrastructure.

However, this modern tourist attraction does not impact on the traditional conservation system by the people in Raja Ampat. Sasi, a conventional way in some Maluku and Papua regions in Indonesia, is a prohibition on taking specific natural resources as a conservation effort to maintain the quality and population of fauna, including underwater. This long tradition of "closing" and "opening" areas for fishing gives fishes a chance to reproduce and grow before being harvested, ensuring a sustainable fishing practice.

However, some noteworthy dive sites are Cape Kri, Saonek Island, and Manta Point near Arborek Island.

This dive site is located to the south of Waigeo Island, close to Arborek and Mansuar Island. In one dive, you can see 5 to 20 manta rays which circle back again and again for cleaning and feeding on plankton at the cleaning station, which is located under 6 meters deep in the water. Manta rays will shop up mostly when there is current, and visibility can range from 5-15 meters most of the time.

Located on the south of Waigeo, Saonek is actually a village where the dive site is located. It has a sandy slope with 5-20 meters depth and popular for muck diving. In this dive site, you can expect to see mimic octopus, ghost pipefish, mantis shrimp, crocodile fish, flamboyant cuttlefish, frogfish and scorpionfishes.

Misool island is known for its soft corals, shallow mangrove areas (be aware of some saltwater crocodile in this area), reef fish, mantas and pelagic species, which will make for some excellent wide-angle photography. Some sloping walls with colorful soft coral carpet also become houses for some small critters, from ghost pipefish to harlequin shrimp and pygmy seahorses. Misool also has at least three ponds with unpoisoned jellyfish, all in Misool area. There is also No-Take-Zone which expanded to a total 465 square miles in 2010, initiated by the owners of Misool Eco Resort in 2005.

Around this island, there are 4 islets which you can dive and become home to a large variety of marine creatures, located about 25 kilometers southeast of Misool Island. Sometimes, great hammerhead sharks can be found here, coming up to shallower water to check out what divers are doing in the water. With a depth of 20-40 meters, the visibility can be up to 20 meters. Bottom contour consists of drop off, slope, and mixed shape with coral reef as bottom composition. You can see some Snapper, Fusilier, Sweetlips, Butterflyfish, Angelfish, Grouper, Damselfish, Anthias, Batfish, Wrasse, Parrotfish, Surgeonfish, Triggerfish, Boxfish, Pufferfish, Porcupinefish, Gobies, Moray eels, Scorpionfish, Flathead, Blennies, Dragonet here.

Located 20 kilometers from Misool Island, this islet of Farondi is one of the favourite dive sites in Raja Ampat due to its unique and distinctive landscape: tunnels, caverns, and colourful walls. It highlights two famous dive spots, which are Goa Besar and Verena’s Garden.

The current on this island can be strong, which also means pelagic fishes around, such as schools of jacks, giant trevallies, and yellow-tail barracuda, while some sea snakes, octopus, and wide variety of nudibranchs can also be spotted here. In short, this dive site has healthy reefs, lots of fish life, and more macro than you know.

This dive site shows that Raja Ampat does not only have big stuff, as you can encounter a sloping wall covered in a blanket of soft corals with vibrant colors. Some critters in this area are ghost pipefish, pygmy seahorses, nudibranchs, and flatworms. Sometimes, a night dive here can also be stunning.

This dive resort will bring divers to Misool Island Area. 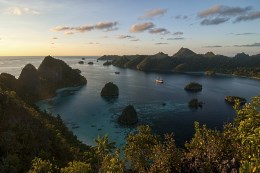 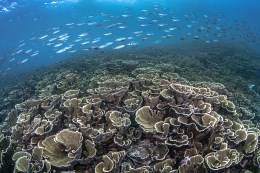